Tullamore’s 1XV produced another spirited and tenacious display to come away from Fitzgerald Park with a 27 - 20 victory in division 2C of the All-Ireland League.

Tullamore’s 1XV produced another spirited and tenacious display to come away from Fitzgerald Park with a 27 - 20 victory in division 2C of the All-Ireland League.

Following on from last weekend’s great 16 – 12 win over Malahide at home, this team is now beginning to settle into a formidable outfit.

Conditions at Fitzgerald’s Park were not pleasant to say the least, with driving rain and heavy cross field winds.  It was the home side that faired the better, using the gale force to their advantage as their lanky lock, Aaron McCloskey crossed for their opening try after just 4 minutes. Despite this early breach of their line, the Tulliers did not panic and settled into the game with real purpose and intent, earning a penalty just before the first quarter passed. Out-half Karl Dunne, slotting over despite the tough conditions facing him.

Thomond showed much better pace on the ball and immediately responded to the increasing Tullamore threat as McCloskey crossed for his second try just before the half hour mark, to open up a 10 – 3 lead.

Once again Tullamore applied pressure in the Thomond 22 and they were awarded another penalty, which was duly converted by Karl Dunne to bring the score back to 10 – 6.

Thomond’s position at the bottom of the table drove them further up the pitch and they crossed the Tullamore try line for the third time, with McCloskey bagging himself a hat-trick in the process. Their out-half Evan Cusack adding the conversion, his first successful attempt out of three. This increased the gap to 17 – 6 once more.

As the rain began to subside, Tullamore responded with intent and piled the pressure on the Thomond line – Sean Rigney eventually finding a gap to cross the whitewash, with Dunne’s conversion reducing the deficit to 4, to leave the teams 17 – 13 at half time.

The Tullier’s continued to mount their attack in the second half and after some strong scrummaging, Tullamore looked in control. The front row of Eamon Bracken, Cathal Feighery and Matthew Murphy making shreds of their opposition, which eventually forced the referee to take action. Thomond soon finding themselves reduced to 13 – earning one yellow card for a high tackle and another for infringements at the scrum. With the pressure mounting, the Tulliers earned their reward through a penalty try just before the hour mark, which saw them go ahead for the first time in the game.

From the restart, Tullamore continued to dominate possession, with the pack executing some crucial attacking mauls to gain important yardage, which was aided by the efforts of the half back pairing of Sam Burns and Karl Dunne.

With just 5 minutes remaining, Tullamore were awarded a further 5 metre scrum, with Thomond hanging in by a thread. After an impressive carry from substitute Lemaki Viapulu, the Tulliers opened up a 10 point lead. As full time beckoned, Thomond fought back in the hopes of a losing bonus point, and managed to crawl their way up to the Tullamore 22 where they earned a consolation penalty. Thankfully for the Tulliers, it wasn’t quite enough to reduce their 7 point lead, which saw them close out the game 27-20 winners.

This was an important win for Tullamore which has moved them up to 7th place in the table, after a tough few weeks in the drop zone. The key to this victory was the immense work rate of the forwards, along with the precision kicking by out-half Karl Dunne, who successfully kicked 5 out of 6 attempts at goal in dismal conditions. Next Saturday Tullamore are at home to second place Middleton, which is their final AIL game of 2018. Kick-off is 2:30. 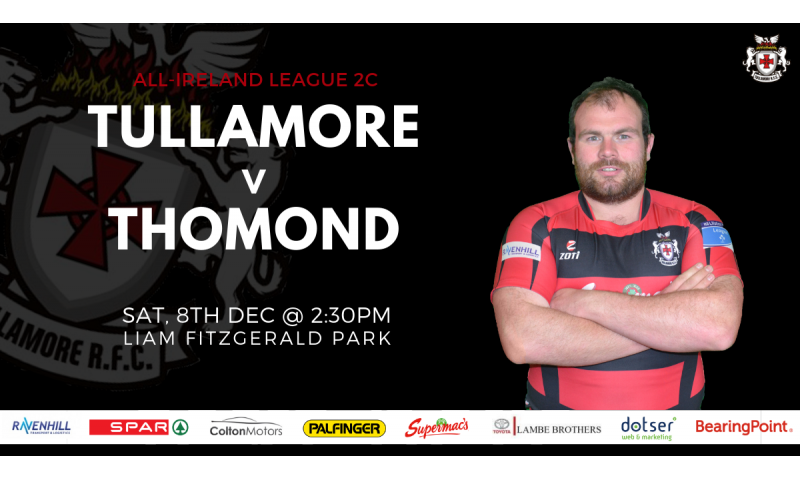 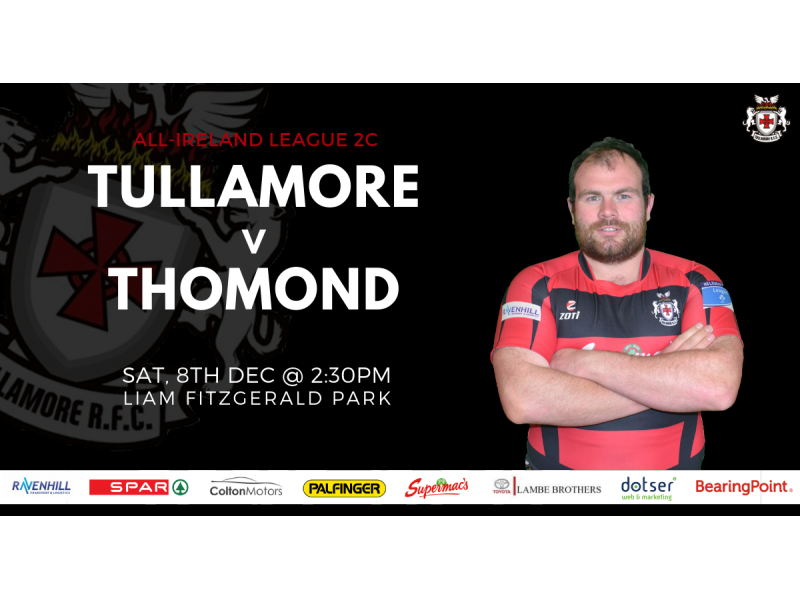