The final score line of 3-3 might suggest a boring game but this was an epic final. It had everything one could ask for. It was a no holes barred contest that both teams can be proud of their own displays. It had passion, tension, close misses, great tackles and both teams gave it their all to win.

Tullamore were playing their third game in eight days. Tullamore started the brighter and were awarded two penalties within the first 5 minutes. However both were at acute angles and narrowly missed the target. Both teams were engaged in a fierce battle and the game ebbed and flowed. Naas eventually began to get the upper hand and they exerted a lot of pressure on Tullamore. To a man, Tullamore stopped wave after wave of Naas attacks. Under this pressure they conceded a number of penalties, but Naas were not able to convert any. Both packs were working very hard and Jamie Fallon, Kealan Hand, Sean Flynn and captain Brian Keogh were magnificent. Diarmuid Egan kicked brilliantly and turned the Naas team back deep into their own half. Tullamore’s Alex Halpin was magnificent under the high ball and caught a number of balls that Rob Kearney would have been proud of. The half time sounded and the teams were level without any points on the board but both sets of supporters were enthralled in the contest.

Naas started the brighter in the second half and pounded the Tullamore defence. On several occasions they were awarded penalties and opted to run the ball but each time they were stopped with fantastic tackles by Conor McGuinness, Cathal Farrell, Adam Flanagan and Thomas Ryan. After 10 minutes, and after being awarded another penalty, Naas opted to shoot for the 3 points and they converted. Tullamore were beginning to feel the efforts of the previous week but as usual they kept finding more. Tullamore lost the influential Cathal Farrell after 15 minutes of the second half to an eye injury. Cathal was replaced by Cian Cronly who can consider himself unlucky not to have started and is a very good player. Cormac Izuchukwu was beginning to be a thorn in the Naas side and chased and harried the Naas defence. Eventually Naas were penalised and Diarmuid Egan was handed the task of trying to kick Tullamore level with 10 minutes to go. Under this pressure, Diarmuid kept a cool head and the hours he spends practising was rewarded and he split the uprights from 30 meters, 3-3.

Both sides attacked and counter attacked in the last 10 minutes. Eoin Deegan drove the pack on and spearheaded numerous attacks into the Naas half. Stephen Fitzgerald was throwing well in the lineouts and Shane O’Callaghan was making his strength felt at the breakdown. Adam Stone played well in the scrums playing at hooker and made numerous good tackles in open play. Naas attacked again and almost made it into the corner for a try but for the intervention of Diarmuid Egan who made a crunching tackle on the Naas player and put him in touch 2 metres from the line. From the resultant line out, a Tullamore made a fine clearance up the field. Cormac Izuchukwu chased the ball up the field, the ball bounced in his favour and he kicked chased the ball to the try line. Cormac and two Naas players dived on the ball, Cormac got his hands on it first but the referee deemed the ball had crossed the dead ball line and so the effort did not stand. James Gillen came on to replace Jamie Fallon and he slotted in well and helped Tullamore turn up the pressure on Naas.

In injury time Tullamore made one more gallant effort to win. A ruck formed inside the Naas 22. Tullamore won the ball, Eoin Keegan had the initiative and courage to go blind side and was just thwarted from scoring a brilliant winning try in the corner.

The final whistle sounded and the match was halved at 3-3. Everyone of the squad can be proud of their performances both on the day and the hard work they put into training sessions. But a word of special mention goes to Jamie Fallon, Brian Keogh, Diarmuid Egan and Alex Halpin.

The two teams will meet again in the replay 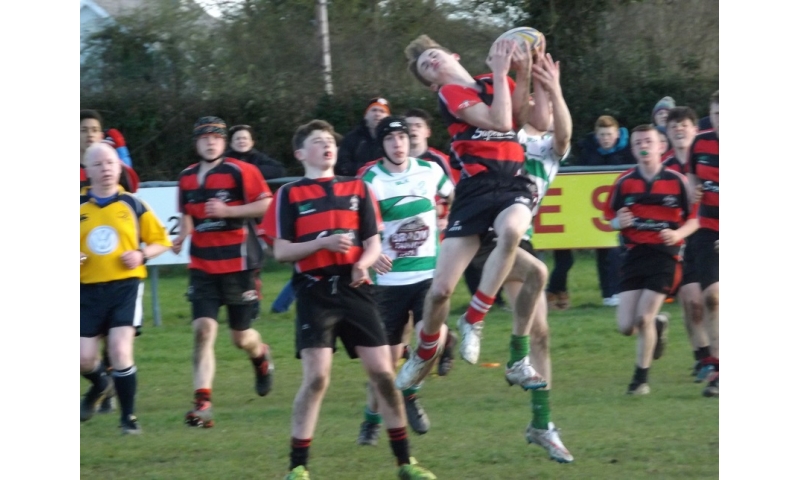 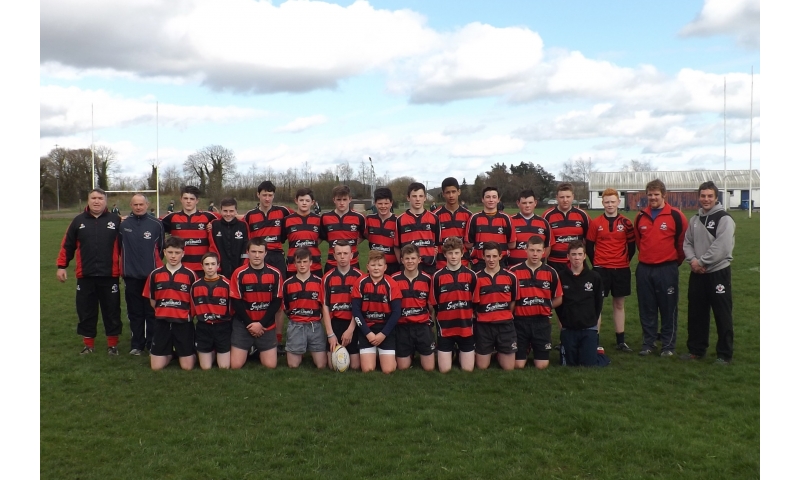 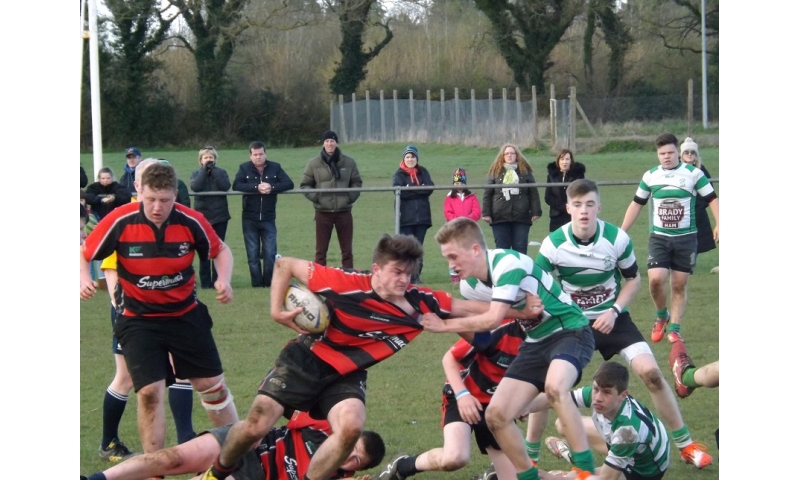 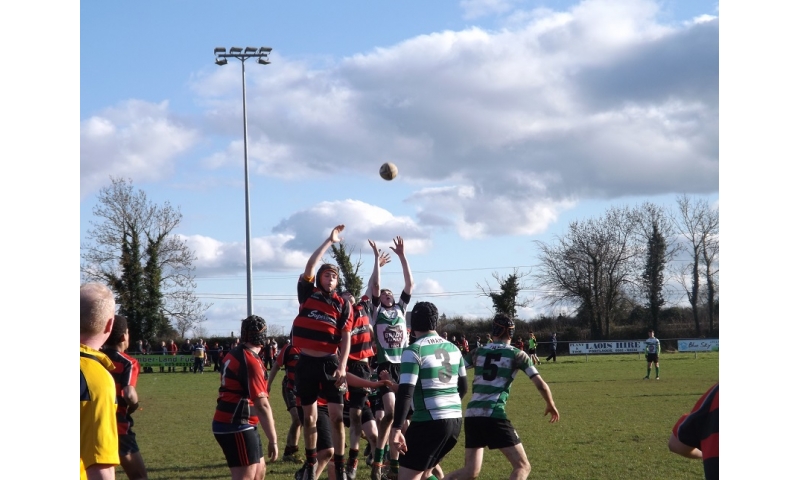 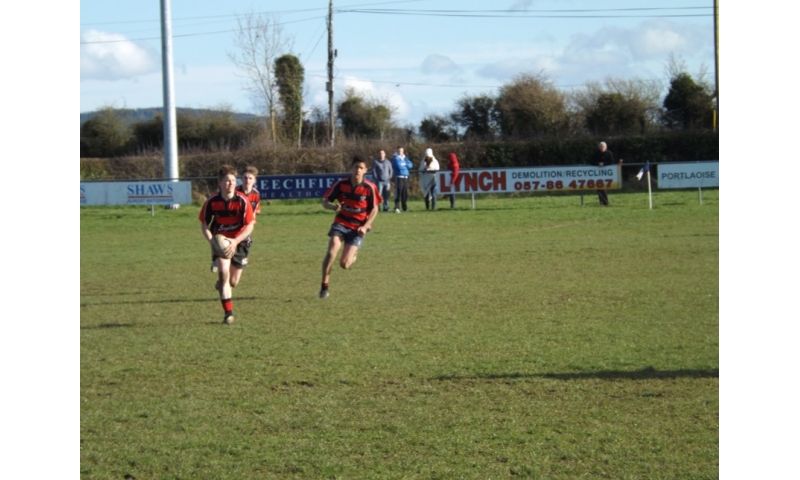 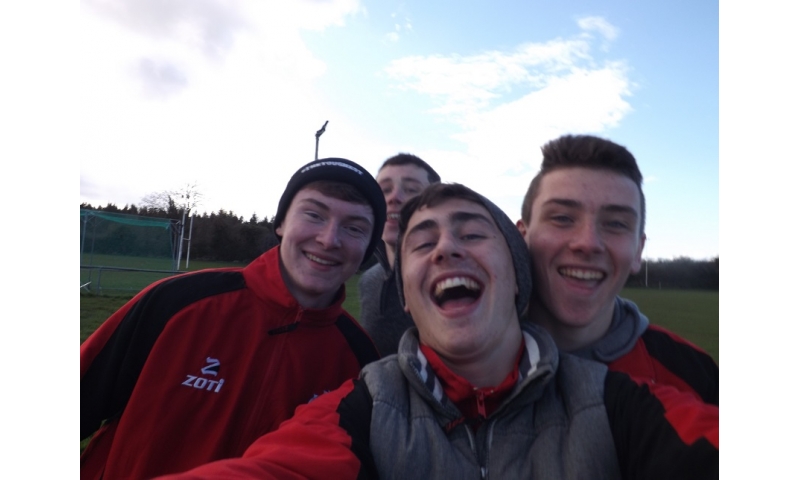 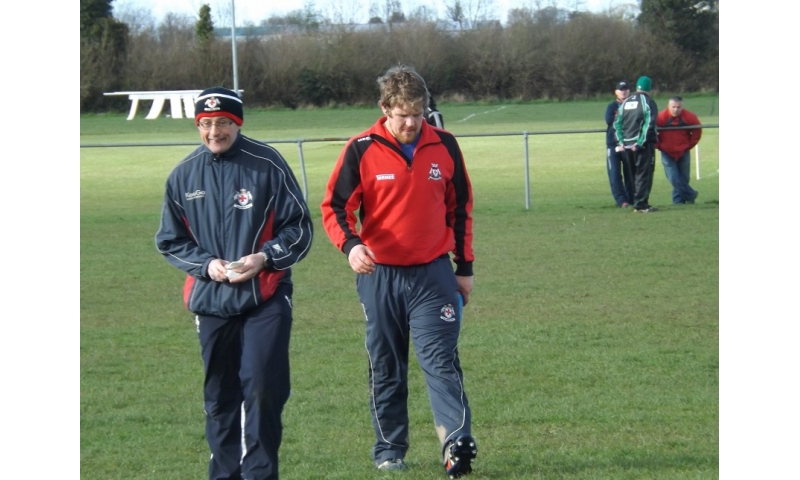 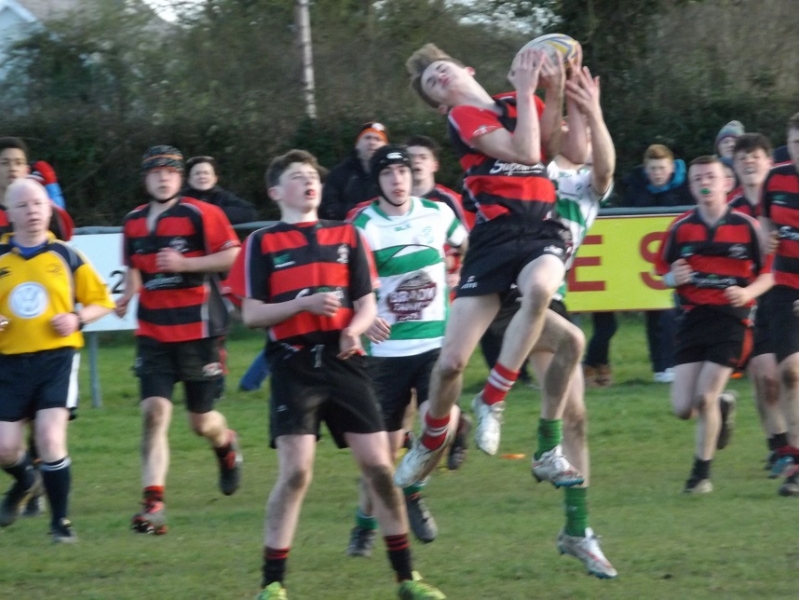 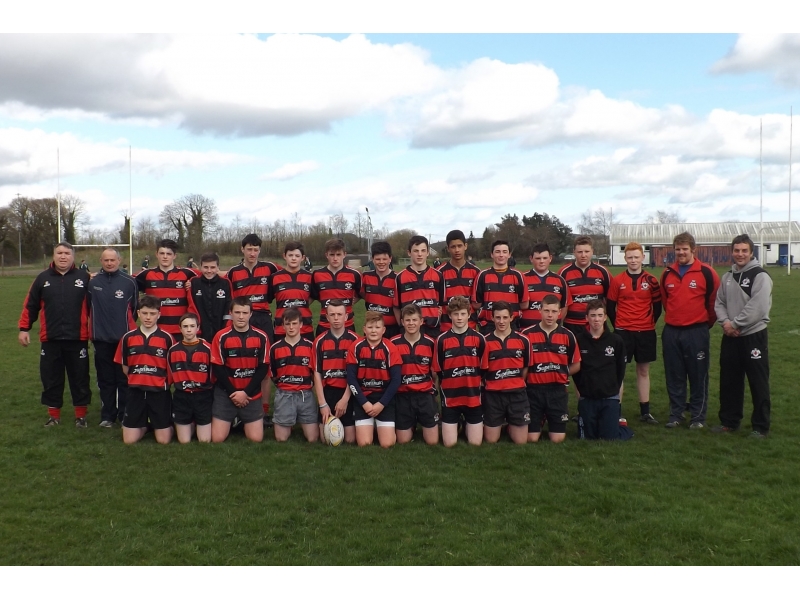 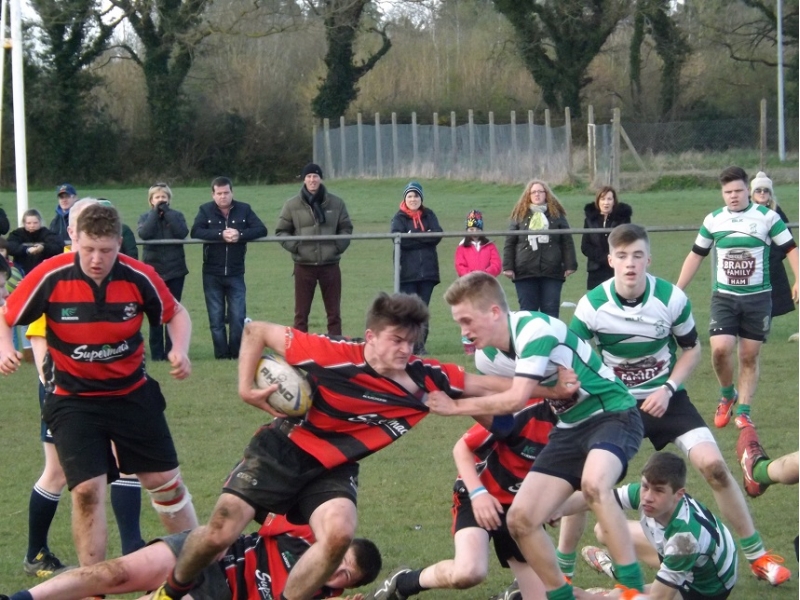 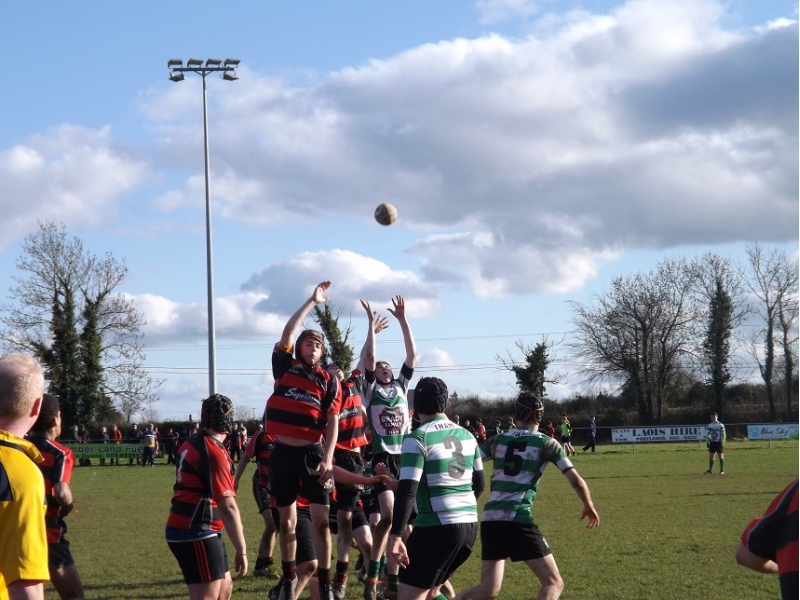 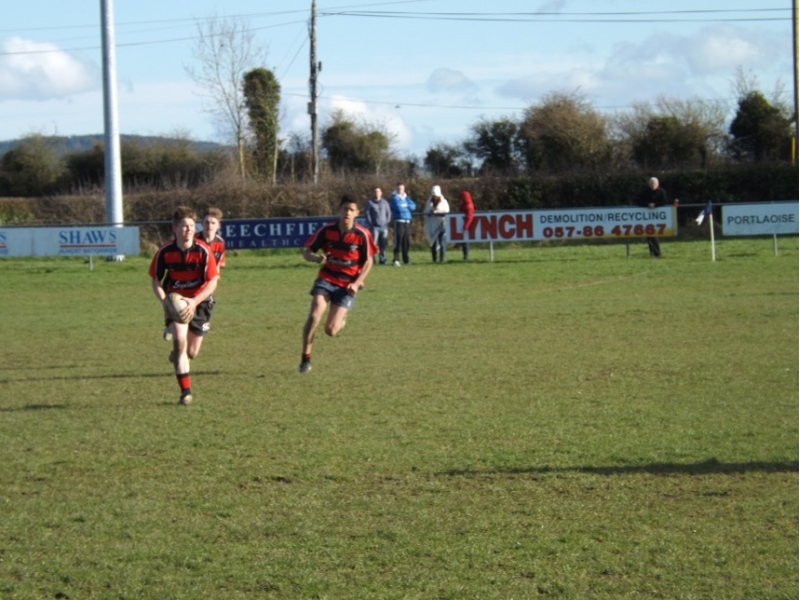 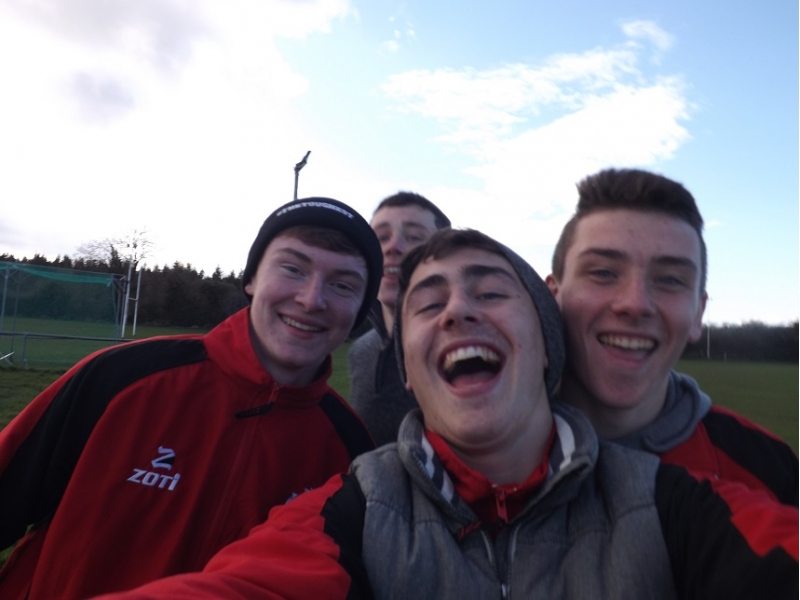 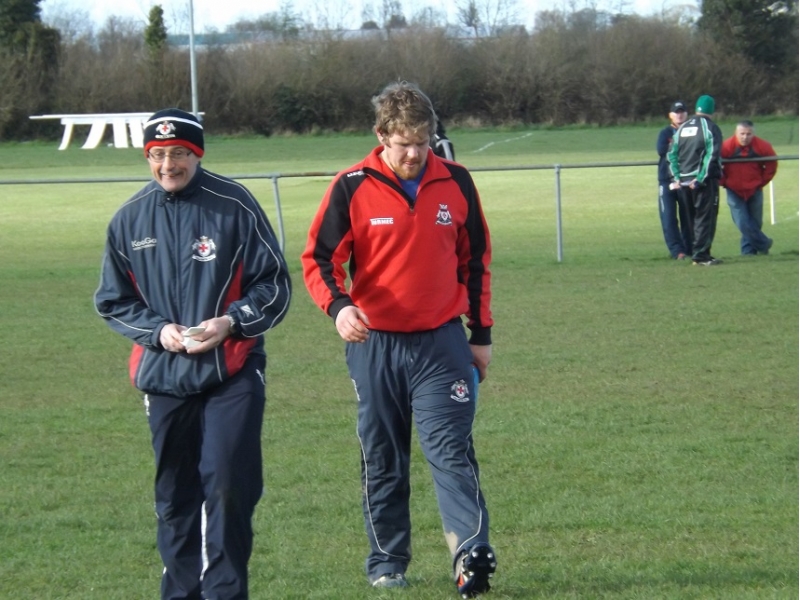