Tullamore faced their most skillful opponents to date on Sunday, and the Rathdrum club must have left wondering what they must do, to beat this Tullamore team.  Rathdrum started very brightly, and put a lot of pressure on Tullamore. They continually opened the Tullamore defense with clever running and skillful passing to create clean line breaks, and it took some brave last ditch tackles to keep Rathdrum out. They were awarded a penalty in front of the posts and they duly took their 3 points for a well deserved lead after only 7 minutes of play. Tullamore continued to defend well, and made a lot of tackles, which would have pleased the Tullamore coaches. Tullamore however just couldn’t get any momentum going. With the cold weather not helping matters, there were plenty of knock-ons and dropped balls which kept giving the ball back to Rathdrum. This wasn’t helped by what appeared to be a lack of urgency from the Tullamore girls.

There were some excellent examples of the skills of the girls though, with tough carrying from Ciara Farrell and Emer Phelan in particular. It was during Tullamores’ best period of the half, (which lasted for about 10 minutes) that Emer Phelan crossed under the posts for a try which was converted by Pauline Keating after 30 minutes. Half time came with Tullamore leading 7-3, having been outplayed for most of the first half.

This team has shown plenty of guts in the past however, and a tight game was not going to phase them too much. Rose Dunne had been excellent in the centre, and at half time she was brought back into the pack where her enthusiasm could be put to better use.

A number of the girls stood up in the second half, to really bring the game to the opposition, and maintain the winning run. Caroline Fluery was excellent in the backs and really looked like a danger whenever she had the ball in hand. Rachel Dunne at scrum half was also having a fine game, distributing the ball well and keeping the pack moving forward. Rathdrum were awarded a penalty 10 min into the second half, which they duly converted, to leave the minimum between the sides. Tullamore responded well, and while the game was played largely around the middle of the pitch, Claire Cantwell managed to get onto the end of a long pass and race home to score a crucial try after 15 minutes. This left the score at 12 – 6 and it was still very much in the balance.

Rathdrum continued to exert pressure on Tullamore and kept them in their own half for long periods. Their No 8 crashed over for a good individual try with 10 minutes left on the clock. The conversion was missed which meant Tullamore had the smallest lead for the balance of the game. With about 5 minutes left Tullamore were awarded a penalty in front of the posts, in a kickable position. The decision was taken to go for a scrum, and this was a good decision, as it kept the pressure on Rathdrum. However if Rathdrum had converted their try, then I’m sure Tullamore would have kicked the 3 points to regain the lead.

The remainder of the game was played in the Rathdrum half, and there was a sense of relief rather than jubilation when the final whistle went. There were a huge amount of positives to take out of this game. Missing the Interprovincal stars, Jill Draper, Shannon Touhey and Irish International Nichola Fryday , this was a great test of the depth of the squad.

The opposition were well organized and capable, and to beat them was a great achievement. However there is room for improvement, as always, and the girls themselves should be very happy with how this season has gone to date. They have shown the hunger to keep winning matches, and now they have a taste what will be required to reach the next level.

The team and subs used were: 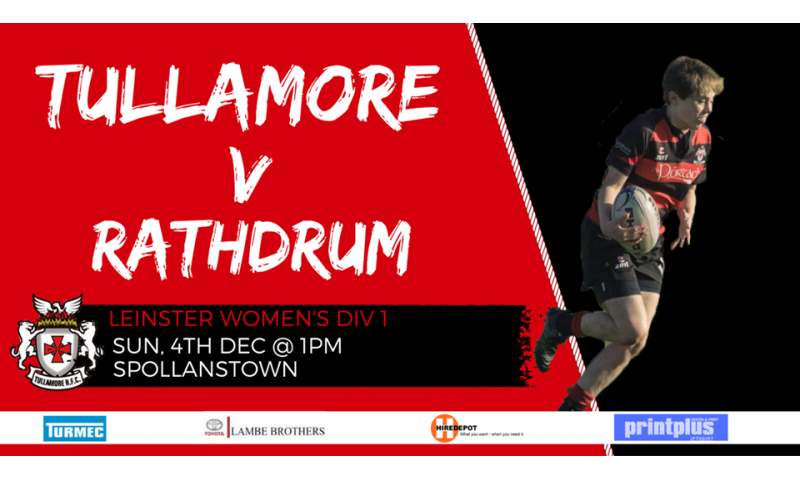 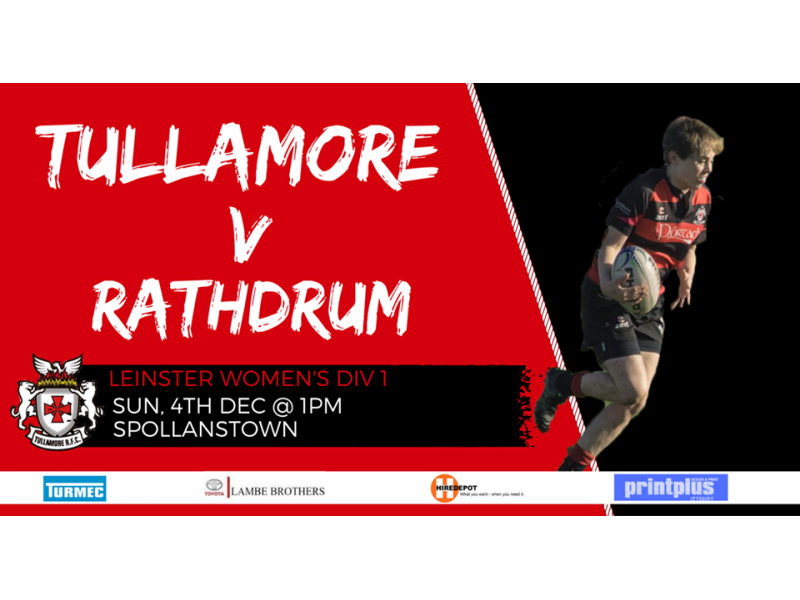