After a long tumultuous start to their inaugural season in the All Ireland League and much media coverage and criticism, Tullamore Ladies Rugby finally recorded their first win away to 2016 champions Galwegians on Sunday afternoon.

On what was a bright brisk winter day, the visiting Tullamore side started strongly putting their first points on the board after only a few minutes through an Emer Phelan try. The #8 running some fantastic lines of attack as always. Out-half Pauline Keating took over kicking duty from the injured Kim Cobbe for the day and started off her campaign strongly with a successful conversion attempt.

This early lead was short lived however, as Galwegians lapped on the pressure from the restart and found themselves with a penalty kick to the left of the posts after some moments of indiscipline from the visitors. Just minutes later, the pressure mounted again as a series of missed tackles saw sprightly full back and Irish international Mairead Coyne run in Galwegians first try of the afternoon. With the conversion added, Tullamore now found themselves 10-7 behind.

Conscious of the fact the two sides sat side by side in the current table standings, the Tullamore ladies had an air of confidence and hunger about them as they sought their first win of the season. Having been akin to such strong success over the previous 4 seasons in the Leinster League, the AIL adjustment period was finally over as the Tulliers reignited their spark.

Despite the fact that the Galwegians pack dominated the scrum early on, the rolling maul off the back of the line-out worked a treat for Tullamore as they gained meters of ground. This move proved instrumental in creating an attacking platform for Tullamore's backs to attack from, while it also resulted in several crucial penalties.

Young winger Clodagh Hannify ran in Tullamore's third try of the afternoon, making a real menace of herself while doing so. The centre pairing of Shannon Touhey and Clare Currams demonstrated fantastic handling, fixing the defenders in order to get the ball out to their winger. Touhey running in two important tries of her own also.

At one point the visitors went 26-15 ahead, creating an 11 point lead for themselves for the first time this season. The confidence this created among the players was most welcome as they strove to spur one-another on at the break.

Not happy to let Tullamore have all the fun, Galwegians fired up a resurgence in the second half and pinned the visitors into their own half for long periods of play. Flankers Rose Dunne and Roisin Feighery, along with prop Katie Murray, to name just a few were out-standing in defence. Hooker Moya Griffin also stole a loose ball at the side of a Galwegian ruck late on, which relieved huge pressure for the visitors.

With just over 20 minutes left to play, the deadlock broke as Galwegians ran in a sneaky try in the right corner, consequentially reducing the difference to 4 points.Tensions reached boiling point for the last 5-10 minutes as the hosts camped inside Tullamore's 22, looking for that all important try that would see them go ahead. Unfortunately the Tulliers attempts to keep them at bay fell short with just 3 minutes remaining. Galwegians now 1 point in front, 27-26. It was do or die for the Tulliers, with the the clock ticking by and full time fast approaching. The ladies in black and red showing they're a force to be reckoned with as the ball was passed out wide to Hannify from the restart. The electric winger using her pace once again to run in her second try of the afternoon and Tullamore's 5th of the day. With so much riding on the try, it appeared as if she would never make it to the try line as three Galwegians defenders chased her down. Thankfully Hannify reached the whitewash before the latter tackled her. Her teammates breathing a huge sigh of relief as they were now 4 points in front.

The final whistle blew just seconds later, with the game finishing 27 - 31 in favour of the visiting Tulliers.

Next weekend sees a rematch of sorts as Galwegians travel to Spollanstown to take on Tullamore. A win would see the Tulliers rise from the bottom spot for the first time since the campaign started. Your support would be much appreciated in Spollanstown at 1pm on Sunday. 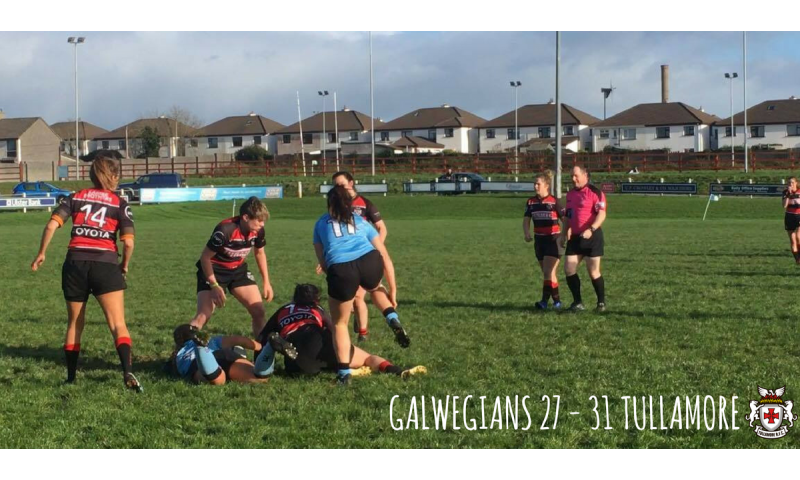 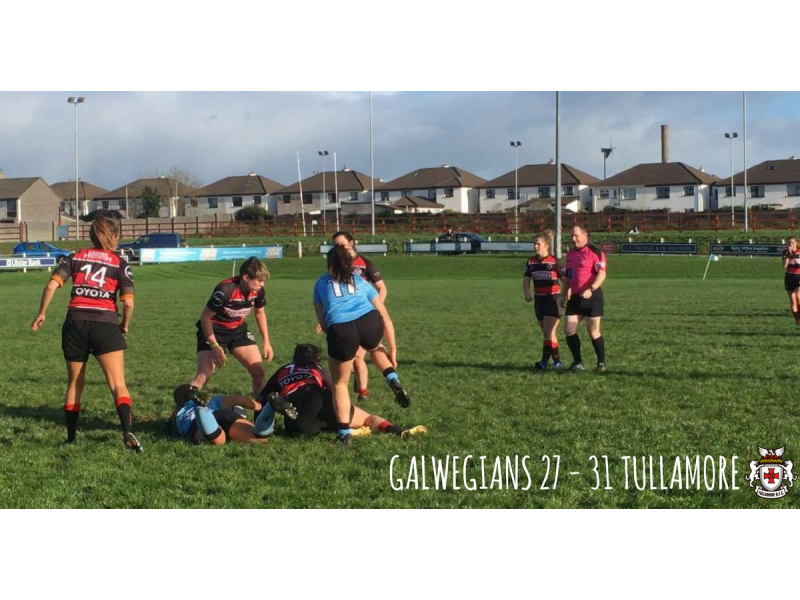