It was a glorious September afternoon in Estuary Road as Tullamore took on newly promoted Malahide in Division 2C of the UBL.

The hosts Malahide had a lot to prove in their first encounter with the midlands club, who are now into their 5th season at All Ireland League level.

Unfortunately it was the newcomers that got off the mark first, slotting down two tries inside the opening 10 minutes as Tullamore's defence looked stretched, particularly on the right wing. The Malahide fullback making a real nuisance of himself in the process.

It took the visitors almost 12 minutes to get their hands on the ball, as prop Ger Molloy broke from the Tullamore 22 to just short of the oppositions 22 yard line. Winger Brian Gilligan was tested on numerous occasions by an agile Malahide backline, however with some assistance from his full-back Karl Dunne, the pair managed to dummy their opposing numbers and make some impressive yardage.

Number 8 and last season's XV Player of the Year, Kevin Browne was in flying form again, getting Tullamore's first points on the board after 14 minutes as he slotted down to the right of the posts, reducing the gap between the two teams to 14-5.

Tullamore struggled to regain possession for the next 15 to 20 minutes as the Malahide backline worked the ball across the pitch. Their full-back causing ructions once again inside the 22, as he ran in their 3rd try of the day.

Gentle Giant Sean Rigney was by far one of the stand out performers on the afternoon, securing numerous high balls in attack, along with a powerful defensive effort inside the Tullamore 22.

Just before the break, Malahide pushed ahead, adding 3 more points to their tally after the Tullamore pack collapsed their attacking scrum 25 metres out. Alarm bells soon started ringing for the visitors as they found themselves 19 points down with 45 minutes left to play.

Blind-side winger Dylan Kelso made the most of his pace before the ref blew the half time whistle, as he burst down the touch-line. Centre Tom Gilligan followed up by running a super line off of out-half Sam Burns, 7 metres out, which he then offloaded to Aidan Wynne who secured the much needed points.

As the match resumed for the second half, the visiting Tullamore team could choose to take flight or fight as the found themselves 24-10 down. Thankfully they chose the latter and were by far the more impressive team for the remainder of the match.

From the kick-off, the visitors showed real hunger, with the pack leading from the front as young Rigney made a great dash to reclaim the ball from 8ft up. Somehow, Malahide managed to wriggle their way through the Tullamore defence in the form of their lanky second rower who used his long legs to outrun Tom Gilligan. Thankfully this was the last Malahide run as such, as Tullamore regained the ball and started to build some phases, with Karl Dunne illustrating some slick handling skills in the process.

Experienced Tullamore scrum-half Hopper Farrell led by example as he ran in the visitors 3rd try of the afternoon off the back of a maul and narrowed the gap to 16 points between the two sides. With 15 minutes remaining, the pressure started to build, but respond, Tullamore did, as Sam Burns found some form, using his quick feet to score under the posts. Credit must go to the pack however, for their pick and drive efforts in the minutes leading up to this. Substitute Cyril Cornally showed real hunger and determination after his introduction, who along with back-rower Lemecki made some strong carries.

With 6 minutes remaining Malahide were reduced to 14 men following numerous offside infringements, however this came too little too late to have any impact for the visitors and their attacking efforts. The match finished 31-22, however Tullamore should be very proud of their second half performance.

They take on Bruff next Saturday at home @ 2:30pm in what will be a must win game. 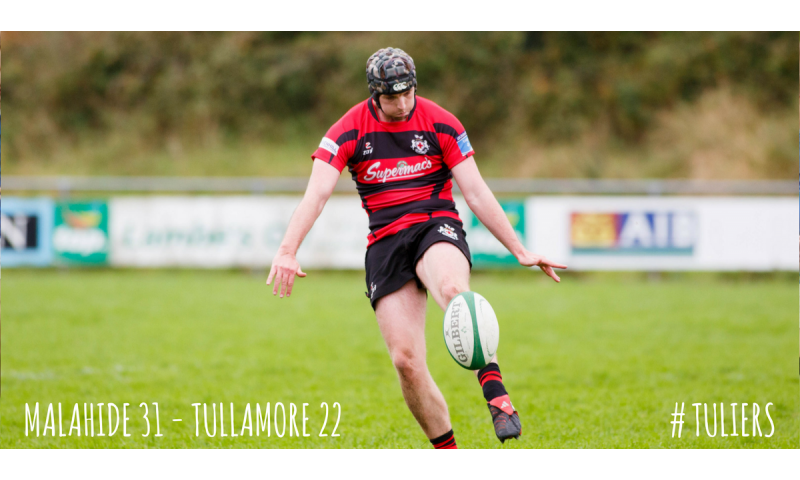 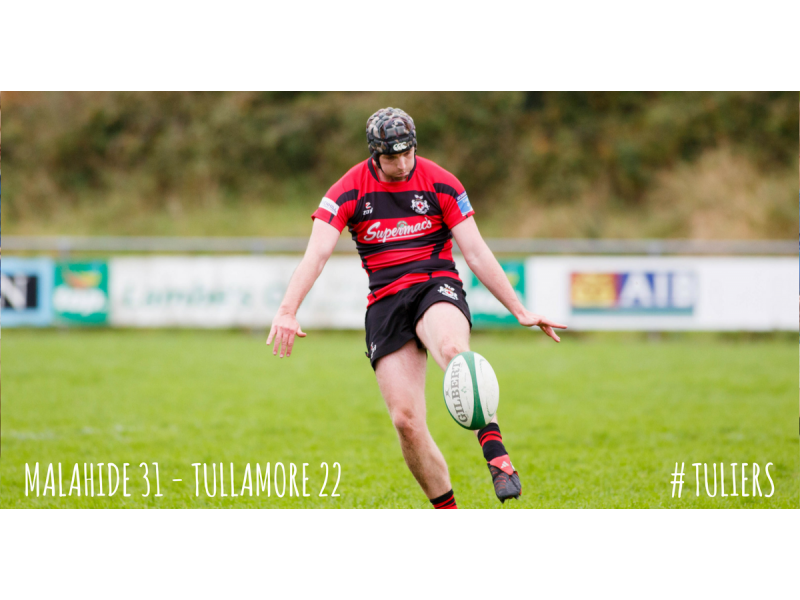