Tullamore's start to the 2018/19 season in Division 2C of the All-Ireland League got off to a less than inspiring start over the last two weeks.

Tullamore's start to the 2018/19 season in Division 2C of the All-Ireland League got off to a less than inspiring start over the last two weeks.
After a defeat away to City of Derry in their opening fixture, they welcomed Ballina to Spollanstown on Saturday afternoon. The strong home crowd that gathered for the game, expected the Tulliers to put in a solid performance in a bid to right the wrongs of their opening fixture. Unfortunately what unfolded before their eyes over the next 80 minutes was bleak to say the least.
Ballina were keen to hit the ground running and laid siege on the Tullamore try line from kick off. A slow start from the home side, saw them go 0-7 down after five minutes, with Ballina winger Darragh Whyte, slicing through the Tullamore defensive line.
Tullamore lead by the ever impressive #6, Kevin Browne, returned fire immediately and some quick offloading by full-back Sean McCabe provided forward momentum. A series of pick and goes ensued and Browne crashed across the whitewash, much to the delight of the home support. A missed conversion attempt by centre Karl Dunne left it 5-7 after 10 minutes.
Ballina, bolstered by great travelling support, attacked from the restart with great intent. The Tulliers found themselves on the back foot once again as Balllina out-half Lindsay ran in from the 22 unopposed. The conversion followed to make it 5-14.
Tullamore head coach John Burns acted quickly and introduced hooker and captain Cathal Feighrey from the bench, whilst also reshuffling the back line .Feighrey had an immediate impact, making the hard yards and providing scrum-half Andy Hyde with fast clean ball. A series of huge carries by prop Conor Higgins earned Tullamore a penalty and Karl Dunne stepped up to slot it over. Dunne’s attempt struck the upright and it was Ballina who were quickest to react as their full back O'Neill set off with blistering pace.
An overthrown line out gifted Ballina possession in the centre of the pitch and quick hands saw the ball spread wide at pace and once again the visitors found a gap to make it 19-5. The conversion attempt was good and gap between the two sides increased to 16 points.
A determined Tom Gilligan, who resumed the position of centre after the reshuffle, found a gap on the restart and good interlinking play between backs and forwards saw Sean McCabe offload to a wide open Jose Mendez to burst through to make it 21-10. This time Dunne made no mistake, duly slotting it over. Narrowing the gap to 9 points in the process.
The final five minutes of the first half would prove to be crucial in deciding the outcome of the game. Tullamore kicked it up a gear and built phase after phase to gain valuable territory in the Ballina 22. A lineout maul after a great take from flanker Gavin Ridgeway had Ballina under severe pressure, but they somehow managed to keep Tullamore at bay, racking up an impressive tackle count in the process. After being held up over the whitewash, Tullamore had the put in to a scrum on the 5. Two further penalties ensued for infringements in the scrum by Ballina and it seemed as though Tullamore were in the driving seat. On the third reset, however, Tullamore decided to go through the hands out the back of the scrum. In a very tight game, small margins make all the difference and a wayward pass was enough to allow the alert Ballina defence to seize possession and once again break for the Tullamore try line.
Another kick in behind saw the Tulliers racing backward to secure possession, but the advancing Ballina out-half, Lindsay, locked onto the ball and Ballina secured a penalty for holding on. With half-time fast approaching, the visitors opted for the posts and increased their tally for the day to 24-12. Tullamore will rue their inability to secure possession off the back of the scrum before half time. A resulting score would have turned the game on it’s head and left a two point deficit. Instead, Tullamore found themselves 12 points down with 40 minutes to go.
In the second half, Tullamore threw everything they had at Ballina with immense physicality from #8 Barry Bracken and #5 Mike Tormey. A lengthy stoppage for an injury and a yellow card to second-row Ciaran Ennis just minutes after his introduction halted Tullamore’s momentum. Ballina sensing an opportunity to break away, made a burst for the try line and another converted try saw the score stand at 12-32.
Tullamore refused to lie down and quick thinking by lanky second-rower, Sean Rigney saw him use every inch in a low dive for the very left corner, with an outstretched arm to secure the points. Dunne once again watched on as his conversion attempt struck the uprights, leaving it 17-31.  With the clock running down it wasn’t to be Tullamore’s day. The visitors bowed out deserving winners as winger Darragh Whyte bagged his second of the afternoon, racing in unopposed from just inside the half-way line to leave the score at 17-36 on the final whistle.
A frustrating day in Spollanstown for the home side who will certainly rue missed opportunities. There are positives to be taken from the game and huge shifts from forwards Gavin Ridgeway and Connor Higgins, along with Galvin's Man of the Match Kevin Bronwe did not go unnoticed. Tullamore will need to learn from this and aim to be more clinical next Saturday when they take on old rivals Bruff RFC in Spollanstown @ 2:30pm
TULLAMORE: S McCabe, T Gilligan, J Mendez, K Dunne, B Gilligan, S Burns, A Hyde; M Murphy, C Feighery, C Higgins, S Rigney, E Bracken, K Browne, G Ridgeway, B Bracken
Replacements; S Pyke, M Tormey, G Molloy, C Ennis
BALLINA: C O’Neill, D Whyte, C Quinn, A Corduff, D Brunker, K Lindsay, M Murphy; C Mason, J Keaveney, S Clarke, A West, H Hewson, T Wallace, F Tully, A McNulty,
Replacements; B McVann, B Boland, J Sweeney, C McCormick, C Mullarkey
Share This Page: 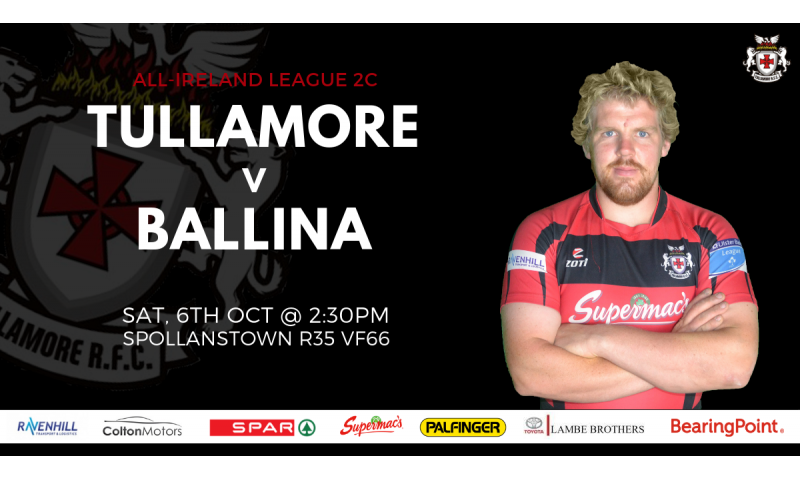 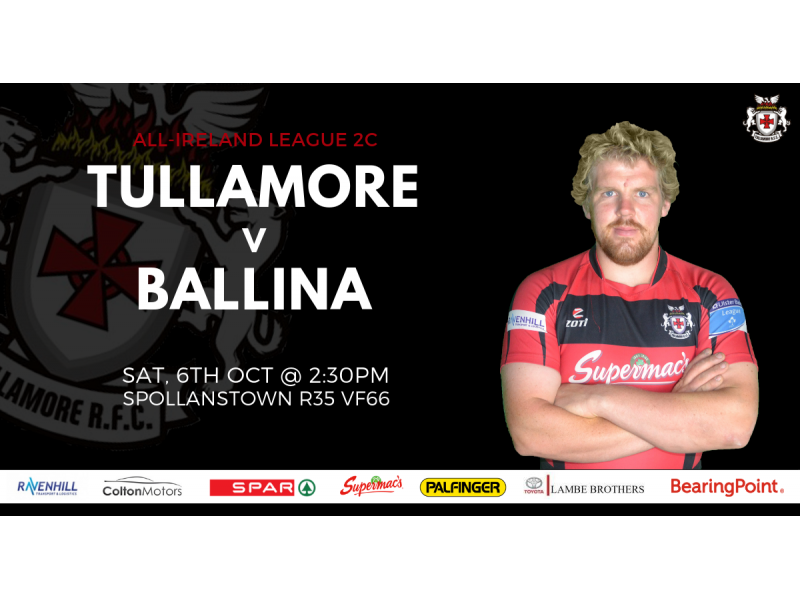